An overview of the process used to select the Snake River Landing development as the proposed site for a Multi-Purpose Event Center in Idaho Falls, Idaho.

Site selection is a key component in the success of any project.  The initial task for this project was to determine if a suitable building site existed in or around the City of Idaho Falls.  An advisory committee was formed with diverse membership representing skill sets complementary to the site selection process. 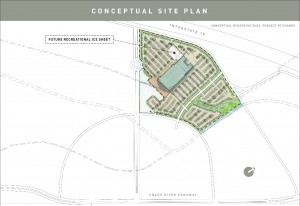 The advisory committee distributed a press release through local media, inviting community members to suggest sites and/or submit proposals of properties to be considered.  Committee members also reached out to local landowners and invited them to submit proposals.  Each proposal detailed the practicality of the parcels or sites, as well as the ability to meet general criteria such as: 1) access to utilities; 2) vehicle access; 3) road and infrastructure costs; 4) site exposure; and 5) overall image.

The advisory committee immediately disqualified two sites due to their lack of infrastructure and the high costs associated with establishing water, sewer, and power to the site.  Two additional sites were disqualified due to: a lack of quality access; inadequate parking; multiple owners or parcel assemblage problems; as well as possible demolition or destruction of property with relocation of current facilities.  The advisory committee created a matrix that evaluated the eight remaining sites against the following key criteria:

The committee evaluated each site using the matrix and a 1-5 scoring system where:
− 1= low/ poor
− 3= medium/average
− 5 = excellent/outstanding

The advisory committee narrowed the list of sites to the three most promising options. This strategy followed the recommendation of Economic Research Associates (ERA). ERA is the independent, third-party research firm which conducted the initial Event Center feasibility study.  In accordance with the committee’s contract with ERA, they evaluated the three finalist sites, using their own independent criteria, and came to the following conclusions:

• ERA found all three sites to be strong candidates.
• The Snake River Landing site scored the highest, primarily due to its location and integration into the overall mixed-use development with high visibility site and location directly off Interstate 15, as well as, master-planned elements such as restaurants, retail, theater, office space, pedestrian areas, and significant landscaping.
Specific Site Location

The proposed site consists of a 20.54 acre parcel, located immediately east of I-15, between the Sunnyside Road Interchange, and the Pancheri overpass. Visitors will enjoy easy access to and from the site via I-15, Sunnyside Road, Snake River Parkway, and Pancheri Drive.  A copy of the conceptual site plan is above.

The property will be acquired through a generous land donation from local business owner Allen Ball.  Project costs are most often broken down into hard and soft costs.  For a project like an event center with a large site parking/amenity component, the hard costs, which are almost entirely made up of construction are approx 70% of project costs, and the soft costs make up the remaining 30%.  Approximately ½ of the soft costs are for things like architectural and engineering design fees, permitting, fixtures/furniture/equipment, special inspections, financing costs, legal fees, etc., and the other ½ is largely made up of land costs.  Therefore, the land donation represents a very significant savings to the project of around 12.5%, and has reduced the project cost.